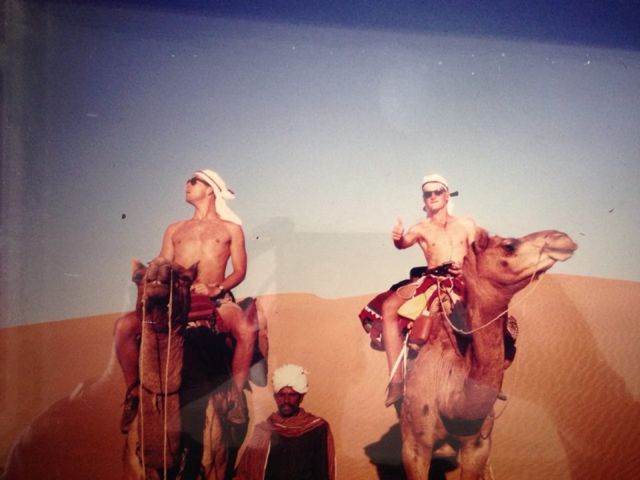 This classic pic arrived our editorial office just recently via facebook. My long lost friend Matthew typed my good old name into the biggest social network and here it is. Taken in November 1988, which means it got here after 27 years! It shows a moment taken on a trip through the Thar dessert in Rajasthan inspired by Lawrence of Arabia.

Different times of travelling, no internet, no cellphones or digitalcameras, no tripadvisor and no creditcards. More difficult but more exciting. The whole holiday fund was carried in a moneybelt. Mail was collected via Poste Restante at the General Post office.

Our continuously played soundtrack on this epic journey was The The’s second longplayer Soulmining. Played on a Walkman with a tiny incorporated loudspeaker. And yes, don’t miss the reflection of the camera and the shadow of the camel driver who took the snap. Look at the colours. Almost Technicolor, isn’t it! And wow what hardbodies we had back then?!

This is the day your life will surely change
This is the day when things fall into place, sung Matt Johnson on Soulmining, the Hitsingle of the album. Just listened to it on youtube, what a cheesy sound, definitely not timeless, but still a nice melody! How many times did we listen to this song, Matthew?

Be Indian buy Indian was the political ideologie those days in the nowadays world most populous nation. Even Coca Cola wasn’t available, since the economic liberalisaton got  initiated only in 1991…

…this was India at it’s best!